Getahun Assefa’s work demonstrates accomplishments in a range of mediums to include painting, sculpture and mosaics. He studied Painting and Graphics with a major in Sculpture at the Alle School of Fine Arts and Design of Addis Ababa University, and graduated with Great Distinction in 1987. He earned a Master of Fine Arts degree with Honor, from Moscow State Academic Fine Arts Institute.

In June 1997, he began working as the Head of the Arts and Crafts Department at Ethiopian Television. He then moved to the Alle School of Fine Arts and Design of Addis Ababa University in 2001, where he became Head of the Monumental Painting Department, a subject he also taught full-time.

Art critic and Appraiser Alan Bermberger , in an article titled Azmari of Arada states that 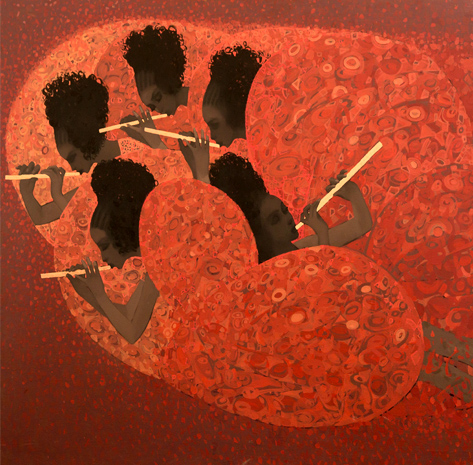 SABA ALENE
"For me, art is a light for my soul."

Getahun’s considerable achievements have already positioned him among the most acclaimed of living East African Artists.” Assefa’s work has been exhibited internationally and his work is home to many private collections to include Ethiopia, Austria, England, Italy, Panama and the United States, among others. St. George Gallery has exhibited Getahun Assefa’s work since 2015.